PAULA MONTANO
The experience of being together

Paula Montano, CJ from Chile, has already lived very deeply the joy of the Union Process. In 2019, she did her Tertianship with the IBVM in Jicamarca (Peru) and today she is part of the group of young sisters from Latin America that every month gather to get to know each other better. “I can’t think of us without including Peru now, we are all part of the same family”.

In January 2020, Paula Montano celebrated her perpetual vows and currently she lives in Bethania, a community for old sisters, where she is in charge of care and support tasks. An essential work that the world has only become aware of now, with the coronavirus crisis.  She is passionate about photography and communication, so we have unofficially named her as the “Latin American correspondent”.

How did you know the CJ? What was your inspiration for becoming a member?

I must say, it was a big mystery how everything turned out. I had always been attracted by the religious life, but my “rational” part kept saying to me that it wasn’t possible. How was I going to became a sister? I had a “complete” life: I was going to University, I worked, I had friends… I had it all but… something was missing!.

One day, in the School, they invited us to a vocational meeting. I wasn´t planning to go, but in the Chapel, I bumped into one of the sisters, she asked something to me and we had a nice conversation. Later, when I was praying, I had a very deep moment of adoration, a moment where I simply felt, “I’m fine here”.  So, I went to the vocations meetings and I started having accompaniment with other sisters. When I told my mother that I was considering entering it was a big surprise for her, she didn´t like it, until Elena Gatica (at that time Chilean provincial) talked to her and she started to accept it. And that’s how my process began. My sister, who passed away a few years later, was very important at that moment. She wasn´t very devout, but she said: “If this makes you happy, go ahead”. That gave me force and courage. It was the right moment; today I might have not been able to take the decision”.

There is no difference between ‘us’ and ‘them’. We are already like a family.

It was 2006 and Paula Montano was only 23 years old. Today, she is very clear that she took the right decision and she defines herself as a lover of Mary Ward’s history and charism: “Her values are totally valid today. They are a constant call to be ourselves, to be truthful: I can’t believe one thing and do a different one. Freedom, well understood, is also very important for me. To be able to say how you feel and what you want. And this links with the idea of joy. I think joy is very important in religious life. And, for that, it’s essential to do something that you really like, ministries where you feel good”.

And last, but not least, Paula talks about the importance of justice: “Justice is crucial for me: to take care of our common home and the people, especially women. I feel that, as Mary Ward did, we are called to be brave women and raise our voice against abuse: femicide, rape, trafficking. No more silence. I’m really grateful to know that we have sisters working against trafficking, helping migrants, fighting unfairness”.

You were one of the first CJ sisters in doing the Tertianship with the IBVM. How was this experience.

Well, in Latin America both congregations do a lot of activities together, so when they proposed that I should go to Peru for my Tertianship, I just thought it was ok, no problem. But when the time arrived, I must confess I was afraid, I didn´t want to go. I even got ill! When I arrived in Lima, and next day in Jicamarca, I had indigestion, because of nerves. It was a really difficult beginning. But then, in just a few days, something happened to me. I felt there the same way that I had felt at first: “I’m good here. Here it is. This is my place”. In fact, I was supposed to be there just for a few months, but I ended up staying the whole year. That place, the school, the sisters… they were the visible face of God for me. They showed me another approach to education: it is not charity, it is justice. These girls and boys deserve the best, the same as the others.

Since then, I feel there’s no difference between them and us. When I think of Latin America, I don’t think only of Brazil, Chile, Argentina (the three CJ provinces, that are becoming one -Amerindia- in April); I always add Peru. I have a very deep link with the sisters there.

What do you hope from Union? Do you have any fear?

My only fear is language, because most IBVM speak English. But I know that won’t be a problem. In the time I was in Peru, we broke all barriers: language, nationality, age, cultural differences…

Besides, we are already working together. We have the UN-JPIC group and we, the youngest sisters, are in a group to share our interests, to get to know each other… We are already like a family.

And, as a family, we help each other. We have been a great support to one another during these difficult times of the Pandemic, and Paula is a great help for the Communications office in Peru, with her photographs and artistic cards for every 30th of each month, when both congregations celebrate the Day of Prayer for Union, and other activities.

“We can do a lot for people in need”

Working against trafficking in USA 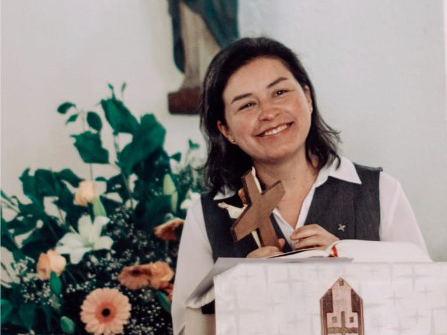