JUDIT KNÁB
“We can do a lot for people in need”

Judit Knáb, a CJ sister from Hungary -part of the MEP Province- works very actively against trafficking through awareness raising, prevention and networking. In this interview, she tells us how she decided to become a CJ sister and what strengths and difficulties she finds in the Union Process.

You are currently working against trafficking in Hungary. Tell us something more about this commitment

My awareness arose when I attended our JPIC conference in July 2014 in Rome. After it, I realised, that in the Catholic Church of our country nobody was committed the mission of working against trafficking. In September, some sisters from different congregations in Hungary started to pray and reflect together about what the Holy Spirit calls us to do in that matter. We visited a shelter in Vienna and we invited sisters from abroad and lay women from Hungary who worked in that field. Very soon we were involved in the conferences of RENATE, led by Sr Imelda Poole, IBVM, and we started networking with different groups. On 8th February 2017, we established the SOLWODI Hungary Association (Solidarity with Women in Dstress). Three sisters from different congregations are involved in working against this kind of modern slavery. Step by step we realised the most important ministries we can do beyond praying are: Raising awareness especially in our Catholic Church; working on the question of prevention in different Church communities and schools; offering concrete help for survivors in some cases; networking with other groups, e.g. who run shelters and programs for survivors.

One part of our cooperation with an NGO was that, some women who live in a shelter and do the rehabilitation program could come to our CJ House and we cooked with them once a week. Unfortunately, Covid-19 stopped it for a while, but we are in online contact with them and plan to continue it as soon as possible.

What is the situation nowadays in Hungary and Eastern Europe?

Eastern Europe and especially Hungary is very much infected with trafficking of women, children and men as well. The following text shows the reality: “…Countries where victims are registered … When the focus is on proportions, the top five EU-28 Member States in the period 2017-2018 are Cyprus (168), United Kingdom (91), Hungary (48), Netherlands (47) and Austria (44)*.” The “hidden” reality is complicated, but there are lots of vulnerable groups who are living in extreme poverty (especially Romany people) and/or are undereducated or groups in huge indebtedness etc.

Ending trafficking can start with decisions like reduction of consuming, being aware during shopping and not choosing the cheapest items, because there may be child- or slave labour behind them. Further in communicating with each other we should be more conscious and attentive how we listen to people and how we speak from and to others. What is our reaction when we realise someone is treating a person like an object… or when there is violence or forcing of minors…? Sometimes it is not difficult to help, but at other times you have to be brave.

How did you get to know the congregation?

I grew up in a Catholic family not far from Budapest and we practised our faith even during communism. When I was a university student between 1986-1990, the political situation became more and more unstable. In university towns there were small faith groups and I attended one of them. There I got to know a 17-year old girl, Emma (it is not her real name), who did not know her parents. She was left behind after her birth. She lived in a foster home. Emma opened my eyes and heart to a very different reality that I hadn’t known until that moment. My contact with her had awoken the desire in me to live and work for children like her. Soon afterwards in the spring of 1989, in the town where I were studying there was a Taizé-meeting, the first one behind the Iron curtain. We were very much involved, not only in translating for the Brothers but for organizing prayers, accommodations, meals etc. for the participants – approx. 15000 young people. Before that I did not think that I would have had anything to do with religious congregations. After this meeting, at an ordinary Weekday-Eucharist I felt deep in my heart through the words of the reading and the preaching, God was calling me to enter a congregation. I had no more questions about this. I just didn’t know where exactly He was waiting for me.

That was the year, when in Hungary the so called reform-communists prepared the free elections which took place in spring of 1990. That year brought the news for the religious congregations about freedom and renewal of their lives and ministries. I needed two more years to understand the signs of God. As a qualified teacher, I started teaching and beside that I still wanted to understand God’s will. There were several signs that showed me the next step. A special moment of my way was when I got to know an old IBMV Sister in my village in May 1991. She spent the four decades of communism in Austria and she came home as soon as she could. She was looking for her relatives at home. She grew up in the same village as me and I had an interesting chat with her. Afterwards I attended the retreat organized by our sisters who had already started the education of girls in a reopened school. There was a final moment again during the Eucharist and it was once again the reading, the Gospel and the preaching. So I did not have any more questions and entered in summer of 1991.

What inspires you? How does the Mary Ward Mission interconnect with your values and life?

I hadn’t heard much about Mary Ward before, but I had read a lot about Ignatius. In my formation I was very much moved by Mary Ward’s personality, her courage, her tireless struggling for the truth she recognised and especially how she persevered in her vocation. I feel the Just Soul vision expresses most of her charism and the values we should be faithful to in our ways of life.

Have you worked before with IBVM sisters in any of your ministries? Or have you had any relationship with them?

I’ve always had my mission in Hungary. But I’ve got to known some IBVM sisters. In my first year of the noviciate Sr Eoghan Callaghan came from Ireland to teach us English. During the 400-year celebration in Rome I met Sr Chris Burke, who spent some months with us in Budapest after her term of office. When I’d finished my term of office I was able to visit her and the shared community in Manila. In my last year of being Provincial Superior of Hungary in 2017 there was the first shared meeting of the Province leaders in Rome. I felt very blessed to be present in this amazing moment of our history, where we all have felt the oneness. Last but not least I did the Ignatian Immersion Course in Manresa where there were 8 MW sisters – 4 CJ-s and 4 IBVM-s. That was a marvellous experience of being one. Deep within me I felt the sisterhood and oneness in all of them.

What do you expect from the Union?

I expect that we will be able to strengthen and to take over good or even better traditions from each other. E.g. I prefer the IBVM term for people in responsibility, which is leader instead of superior. I’m sure there are quite a lot of good traditions, practices even structures and contents we could take over – including texts from the volume II of the IBVM Constitutions.

What difficulties do you see for the Process and how could they be faced?

As the last Hungarian Provincial Superior I managed our merging process into the German speaking MEP – Middle European Province. It was a very quick process, less than one year. I was hopeful during the process and I felt it was done together and with the leading and blessing of our Lord. Life shows how much complication is hidden in details we haven’t reckoned with before. After some months or even years, I have mixed experiences and feelings because daily life has shown deficiencies and inadequacies of procedures in some everyday practices. The most important thing I see now is the necessity of continuous reflexion and regular sharing not only during the process, but afterwards as well. It is of course unreal to foresee much of the difficulties for the future, but it can be very helpful to reckon and plan for the need of a lot of time, energy and open eyes and hearts even after the fusion in order to keep the satisfaction and peace in every part of the Congregation.

When I hear about the different ministries of Mary Ward sisters’ and of all the lay people around us, I always feel hope and promise for the future

Tell us something about your background: your interest, previous missions, countries you lived in…

I’m originally a teacher for German and Maths. I’ve thought in 3 of our 4 previous schools that we’ve handed over in my time as Provincial. When I look back on the 30 years I’ve spent in the Congregation, it was quite a difficult period, because of diminishment, losses, mourning, etc.  But on the other hand we could never have such good possibilities to “come together”, to get to know each other and Mary Ward’s legacy, especially through the means of social media as in today’s world. Despite of being nowa much smaller number than 30 years ago, we can do a lot and we can reach out for people in need. When I hear and read about the different ministries of Mary Ward sisters’ and of all the lay people around us I always feel hope and promise for the future which may not be great in numbers but in spirit and spirituality…

Since I don’t have responsibility as a leader I have started cooking and baking. I myself am surprised sometimes how much creativity and joy it awakens in me. I like nature very much and doing an outing gives me much delight.

* Data collection on trafficking in human beings in the EU, page 14.

Working against trafficking in USA

A life fighting for Justice 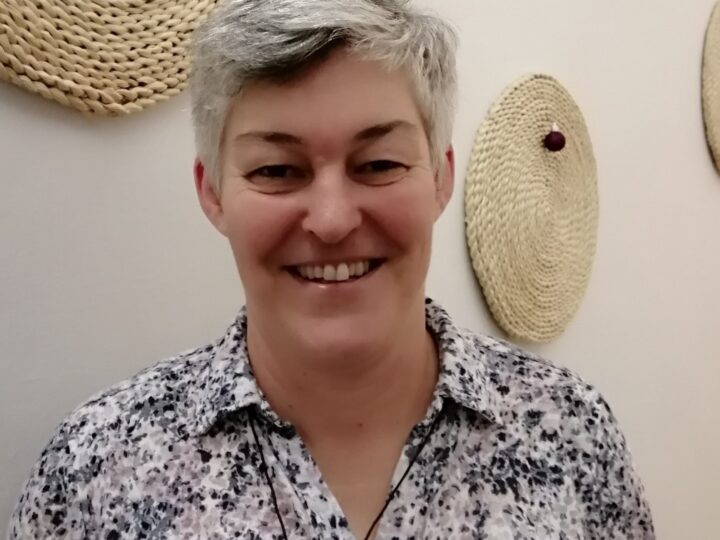